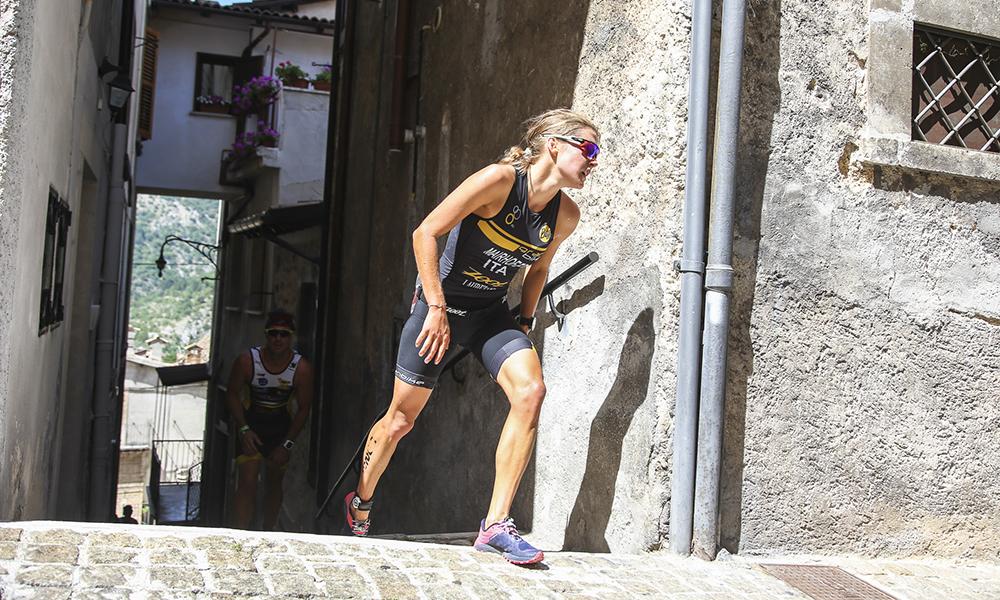 Roger Serrano and Eva Garcia Gonzalez, both from Spain, captured the elite titles at XTERRA Italy, Lake Scanno on a perfect sunny day on Sunday, July 22nd with times of 2:51:49 and 3:30:04, respectively. This was Serrano’s third win for the season and Gonzalez’s first major win ever as an elite athlete.

In April, Serrano won both XTERRA Cyprus and XTERRA Malta. Currently, Serrano is ranked second in the XTERRA European Tour standings behind Francois Carloni of France.

Last year, Gonzalez won the XTERRA European Amateur Championship in Mons Klint, Denmark and won her age group at every race she entered, including XTERRA Germany, Italy, Portugal, Spain, and Denmark. Given her times, she would have been competitive with the elite women as well. She is currently ranked 11th on the XTERRA European Tour.

XTERRA Italy Lake Scanno is the 10th stop on the XTERRA European Tour.

The day wasn’t as hot as last year, but it was still warm and sunny. The elite athletes were in the water first for a non-wetsuit swim. The age-groupers started three minutes later with two, wetsuit-legal waves with more than 250 athletes per wave. The swim featured one big loop with an exit just before the end, a 100-meter run, and then another 100-meter swim.

Serrano was out of the water first in 20:14. Fewer than 40-seconds behind him were Matteo Bozzato and Francesco Nicolardi, both racing on the Italian National Team. XTERRA European Tour leader, Francois Carloni, was about 1:45 back and was with a big group. Xavier Dafflon, last year’s XTERRA Italy Lake Scanno champ, was six minutes back, which was an improvement over last year at this time, when he was seven minutes behind.

Serrano continued to lead the mountain bike loop, which featured 12K of riding and 450 meters of climbing. Both Bozzato and Nicolardi had fallen back, but fellow Italian, Marcello Ugazio, in his first XTERRA, moved into second, about one minute behind Serrano. Behind them, Francois Carloni and Filippo Rinaldi of Italy, were working together. Dafflon was about five minutes back and making up time. At the end of the bike, Serrano, had a solid lead.

“I paced myself on the first small loop, and on the second loop, I saw that Marcello was not faring well,” said Serrano after the race. “On the technical single track, I started to push, and my legs responded well. I was able to keep pushing hard on the long uphill and really focus mentally.”

Once Serrano passed Marcello Ugazio, it was a fight between Xavier Dafflon and everyone else. Dafflon posted the fastest bike split of the day in 1:36:44, which led to his second place finish.

“I was so happy to finish the bike safe and fast,” said Dafflon. “I showed to the others that I am fit and can fight to the front.”

At T1, Serrano was in front, followed by Dafflon, Ugazio, Carloni, and then Rinaldi, all within 30 seconds of each other.

During the run, Dafflon continued to make up time. Halfway through, he was only 35 seconds behind Serrano, who maintained his lead.

“Being so far back after the swim, I had no choice,” said Dafflon. “But when Roger saw me, he was able to accelerate a little and I had nothing left.”

Dafflon crossed the line in 2:52:15, happy with his second place finish, which is his best so far this season. He also posted the fastest run split of 47:45. Ugazio was third in 2:54:31. Less than two weeks ago, he won the U23 title at the ITU Cross Triathlon World Championship.

“I’m happy with this fourth podium in as many XTERRA races this year,” said Ugazio. “I know I can win one, but first, I need to improve on the downhills. I push too hard on the uphills and finish the bike with nothing left for the run. But I won’t give up.”

Rinaldi took fourth while Carloni claimed fifth. Rui Dolores, from Portugal, finished eighth today, moving him back into the top 10 in the XTERRA European standings.

In the women’s race, the fastest swim split went to Austria’s Carina Wasle, who was out of the water in 24:59, just in front of Renata Bucher, and Lizzie Orchard, who was just 25-seconds back.

Gonzalez was fifth out of the water, about 1:40 behind Wasle, while Italy’s Sandra Mairhofer was about two minutes behind Wasle.

After the first loop of the bike course, Bucher had a 2:30 lead on Wasle. Gonzalez was in third but was four minutes back, meaning that she had to make a significant move on the second bike loop and the run to make up that time. Mairhofer was about five minutes off the lead and Orchard wasn’t having her best day.

On the second loop, Bucher kept pushing hard, but Wasle crashed and had a mechanical with her rear break.

“Without a rear break, the long, technical downhill was a nightmare,” said Wasle. “I had to get off and run behind my bike to avoid any additional crashes.”

“I’ve been training on the downhills this year as this race was a big goal for me,” said Gonzalez. “I was feeling very good and moving like I expected.”

Mairhofer was also making her way up, even though each downhill was painful, due to an injury sustained in her hand last week during a training session.

Bucher ended up with the fastest bike split of the day in 2:02:54 and had more than a four minute lead on Gonzalez. However, Gonzalez’ favorite leg is the run. Mairhofer entered T2 in third, where she stayed through the finish.

Gonzalez made a big push on the climb in the run and passed Bucher about halfway through the run course.

“I still have a hard time I won today,” said Gonzalez after the finish. “It’s like a dream. I’m so happy.”

“To be on the podium in my home country is fantastic,” said Mairhofer. “Carina was amazing on the run and moved from fifth to second.”

“I’m somehow very disappointed and happy at the same time,” said Wasle, who posted the fastest run split in 54:04. “I am happy to finish second in these conditions but I also know that this course suited me and was mine to win today.”

Bucher had a tough day on the run and like last week, finished fourth with Orchard claiming the fifth spot.

After today’s race, Wasle is still leading Brigitta Poor on the XTERRA European tour by 144 points. Sandra Mainhofer moves up to the ninth spot and Bucher enters the top ten with Gonzalez close behind in 11th.

Next up on the XTERRA European Tour is XTERRA Romania on August 5th. 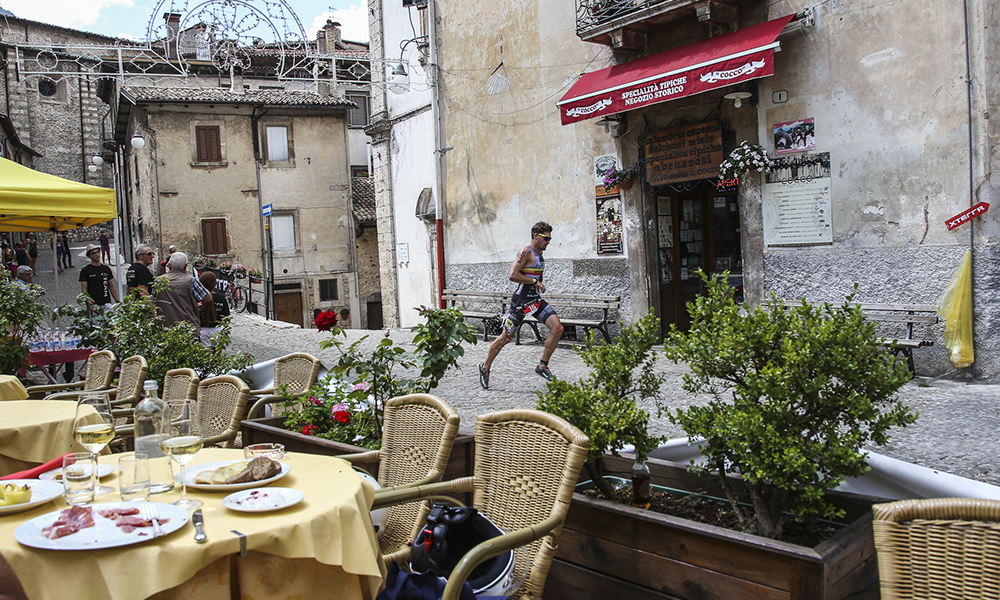